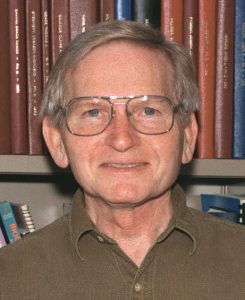 The Perry Frey Group was formed in January 1969, when Perry started his own research group as an Assistant Professor of Chemistry at Ohio State University. The group moved to the Department of Biochemistry at the University of Wisconsin-Madison in 1981. In line with his interest in the mechanisms of action of enzymes, Perry chose for his first research subjects UDP-galactose 4-epimerase and the pyruvate dehydrogenase complex. The group grew with the addition of two or three graduate students each year. Within a few years, postdoctoral associates began joining the group, and other research projects were also introduced. Perry chose research projects that offered opportunities to discover new mechanisms in the actions of enzymes. The Frey group has focused efforts in several areas, including: Nicotinamide coenzyme-dependent nucleotide sugar modifying enzymes, mechanisms and structures of α-ketoacid dehydrogenase complexes, mechanisms of action of members of the histidine triad (HIT) family of enzymes, mechanisms of enzymatic and nonenzymatic phosphotransfer, free radical mechanisms in enzymology, and the characterization and role of a low-barrier (or short-strong) hydrogen bond in the action of chymotrypsin. 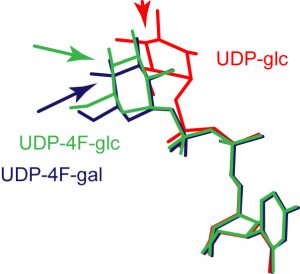 In research on UDP-galactose 4-epimerase (GalE in Escherichi coli) the initial objectives were to identify the chemical steps in the mechanism and then to elucidate the mechanism of nonstereospecific action. Later, after the molecular structure became available, the catalytic mechanism of hydride transfer became a focus of research. Research has led to a clear picture of how GalE works, and the mechanism includes a number of novel and unique aspects. All epimerases and racemases must act nonstereospecifically at some point. The mechanism of nonstereospecific action by GalE is very beautiful and unlike any other enzyme. Other novel aspects of GalE in action include the function of tyrosine as a base at the active site and the polarization of the nicotinamide ring in NAD+ to increase its reactivity. The mechanism is as well established and supported by physicochemical analysis as a typical nonenzymatic mechanism studied by physical organic chemical methods.

An outgrowth of research on GalE led to analogous work on TDP-glucose 4,6-dehydratase, a potential antibacterial drug target. Like GalE, TDP-glucose 4,6-dehydratase was NAD-dependent and structurally similar. Detailed analysis revealed the mechanism of action of this enzyme in atomic detail. The research included the development of the first rapid-mix-quench transient kinetic methods employing detection by MALDI–TOF mass spectrometry, leading to the unambiguous identification of a transient intermediate, the mechanism of its formation, and the mechanism of its further reaction. 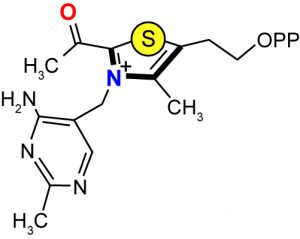 Research on the pyruvate dehydrogenase (PDH) complex was initially driven by open questions about the mechanism of action of thiamin pyrophosphate (TPP) and lipoic acid. The quaternary structure of the enzyme from E. coli was also addressed. Members of the group approached the question of the possible role of a hypothetical intermediate, 2-acetyl-TPP (AcTPP), in the mechanism. AcTPP had never been observed and was not a known compound. Members of the group obtained indirect but powerful evidence of the likely involvement of AcTPP, which was widely thought to be too reactive to synthesize and purify. Nevertheless, members of the group synthesized, purified, and characterized this molecule and then proved it to be a transient intermediate. This work was extended to the a-ketoglutarate dehydrogenase complex, and evidence for the involvement of 2-succinyl–TPP, the corresponding analog of AcTPP, was obtained.

In parallel experiments on the PDH complex, S8 of lipoic acid was shown by a member of the group to be the locus of acetylation, not S6 as had been thought. This required the synthesis of chemically stabilized derivatives of S8- and S6–acetyldihydrolipoate and careful NMR characterization.

In further experiments, the quaternary subunit composition and structure of the PDH complex was characterized in experiments employing scanning transmission electron microscopy (STEM) in collaboration with the STEM group at Brookhaven. In connection with these experiments, electron dense undecagold labeling reagents were synthesized and developed.

Mechanisms of Reactions in the Histidine Triad (HIT) family of Enzymes

An extension of research on galactose metabolism led members of the group to study the mechanism of action of galactose-1-P uridylyltransferase (GalT), which was known to be inactive in human galactosemia. Group members solved the kinetic and chemical mechanisms as ping pong with a covalent UMP-enzyme intermediate, and they characterized the intermediate as UMP-bonded to a histidine residue at the active site. Group members showed the enzyme to be a Zn/Fe-protein, in which the Zn was essential for activity. The molecular structure proved compatible with the mechanism and refined the mechanistic model. GalT proved to be a member of the HIT family of enzymes, and Frey group later proved that other members of the family, including the cancer suppressor FHIT and the plant enzyme ADP-glucose phosphorylase, functioned by the same chemical and kinetic mechanism as GalT, and analogous intermediates were also identified. In another extension of work on galactose metabolism, the catalytic roles of two histidine residues in the active site of galactose mutarotase were discovered and characterized.

Mechanisms of Enzymatic and Nonenzymatic Phosphotransfer 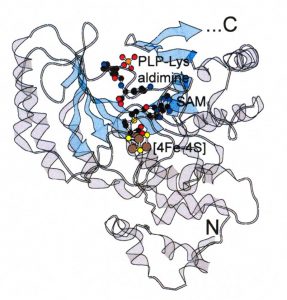 In the mid-1980’s, the Frey group turned its attention to the question of whether a number of enzymatic reactions might proceed by radical mechanisms, that is, by way of free radical intermediates. Free radicals had been regarded as too reactive and too difficult to control to be viable as chemical intermediates of enzyme action. By the mid-1980’s, the adenosylcobalamin-dependent enzymes were thought to be the best candidates for radical mechanisms, although it was also suggested that cytochrome P450 monooxygenases might also function by radical mechanisms. Members of the Frey group generated convincing evidence for radical mechanisms in the actions of methane monooxygenase and lysine 2,3-aminomutase and the adenosylcobalamin-dependent enzymes lysine 5,6-aminomutase, dioldehydrase, and ribonucleotidereductase. In the course of this work, members of the group discovered more fifteen different free radicals at enzymatic active sites, many of which were true transient intermediates of catalysis. During this time, a large number of enzymatic reactions were found to proceed by free radical mechanisms.

An important and novel direction in research on free radicals began with the work on lysine 2,3-aminomutase. S-Adenosylmethionine (SAM) proved to be the radical initiator, and subsequently it was found to function in the same way in a large family of other previously unknown enzymes. Members of the Frey group showed how SAM could interact with the iron-sulfur cluster in lysine 2,3-aminomutase to generate the 5¢-deoxyadenosyl radical, which initiated the radical reaction mechanism by hydrogen abstraction from the substrate. This interaction proved to be a general mechanistic starting point in the actions of the radical SAM superfamily of enzymes.

A Low-Barrier Hydrogen Bond in Chymotrypsin

In the early 1990’s, the Frey group postulated the participation of a low-barrier (or short-strong) hydrogen bond in catalysis by chymotrypsin. They derived their claim by correlating NMR evidence, published twenty years before, with more modern NMR evidence on transition state analogs bound to the active site of chymotrypsin. Their claim applied to other serine proteases with the active site triad of chymotrypsin, Ser195-His57-Asp102. Group members extended the evidence to include linear free energy correlations, deuterium and tritium isotope shifts, nonenzymatic models, and x-ray crystallography. Available lines of evidence, including atomic resolution x-ray crystal structures, support the hypothesis, and no experimental evidence contradicts the hypothesis.