Article as a pdf

Gaining a view of the world through the lens of chemistry and the molecules of life.
For a considerable time, the involvement of free radicals in enzyme catalysis was curiously confined to the realm of only a few flavoproteins, the cytochrome P450s, and cobalamin-dependent enzymes. Likewise, the cofactor S-adenosylmethionine was usually considered to be a methyl group donor. However, the role of radicals in enzyme catalysis has exploded in recent years, and we can attribute much of this to Perry Frey’s leading insight and experiments.

It is a great honor to prepare this short commentary, which reprises a remarkably productive, long, and eventful career that has generated deeper understanding of many essential biochemical processes. It celebrates research thoroughly grounded in basic chemical principles, and honors the deeply appreciated efforts of more than ninety former graduate and postdoctoral students who chose to train in research with Perry and share in his thrill of scientific discovery. It is also noteworthy that thirty senior collaborators have contributed to this sustained scholarly experience.

Perry started out in Plain City, Ohio, a small town about 18 miles northwest from Columbus. As a boy, he delivered newspapers during World War II and earned enough to buy his first bicycle. He made a point of reading the newspapers and learning about warfare. Later, as a youth, he did every kind of farm labor during vacations from school, including working the land, planting, harvesting, and tending animals. Later, he worked for his father, a painting contractor, to support his higher education. Few know that Perry served in the US Army for two years. After this informal education in the military, his formal scientific education began at the Ohio State University, where he obtained a B.S. in Chemistry. After graduation, Perry worked for the US Public Health Service as an analytical chemist in Cincinnati, where he published on the properties of paralytic shellfish poison, saxitoxin, his first of now more than two hundred eighty professional papers. During this time, Perry and Carolyn Scott met and were married in 1961. Perry’s and Carolyn’s first daughter, Suzanne, was born in 1962 in Cincinnati, Ohio. Perry also attended Evening School at the U of Cincinnati during this time, where he studied Chemistry.

Based on the recommendation of a mentor at the Public Health Service, Perry applied for graduate studies with Prof. R.H. Abeles in January 1964 at the University of Michigan and received an NIH pre-doctoral fellowship to support this effort. After only a short time in Michigan, he moved with Abeles to Brandeis University. It was an outstanding opportunity at an exciting time that led to the discovery of many basic principles of catalysis by cobalamin-dependent enzymes. In 1965, Perry’s and Carolyn’s second daughter, Cynthia, was born in Waltham, Massachusetts. After three years, his Ph.D. studies were complete, and Perry began an NIH postdoctoral fellowship with Prof. F.H. Westheimer, one of the preeminent enzymologists of all time, at Harvard University. This fellowship lasted for a year, and led to an unsolicited offer to join the faculty of Chemistry at the Ohio State University. There, Perry rose through the ranks to Professor and Academic Vice Chair.

During his time at the Ohio State University, Perry began many new projects, including studies of UDP galactose-4-epimerase, pyruvate dehydrogenase, galactose-1-phosphate uridylyltransferase, UDP-glucose pyrophosphorylase, adenylate kinase, and many other phosphotransferases. This work brought the role of cofactors NAD, thiamine pyrophosphate, and pyridoxal phosphate to the light. Moreover, it was during this time that Perry began his decades long, definitive work on the mechanism and stereochemistry of enzymatic phosphoryl transfer by the synthesis of isotopically labeled nucleoside phosphothioates and experimental test of these molecules. 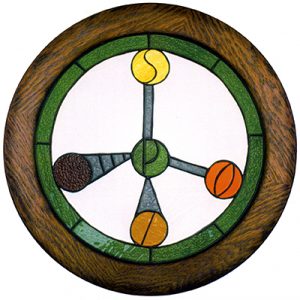 The picture left shows a leaded glass window commemorating Perry’s work on using the isotopically labeled nucleoside phosphothioates to elucidate the mechanism of phosphoryl transfer. His students created this art piece for his 50th birthday in 1985. Each student cut a section of glass, and the sections were fitted and leaded by Rahda Iyengar, an Assistant Scientist in the lab at the time. The work shows chiral [16O, 17O, 18O]thiophosphate, with each isotope of oxygen in a different style.

Perry and Carolyn moved to Madison and the University of Wisconsin in 1981. He was recruited to join the world-renowned Institute for Enzyme Research, which had begun to struggle with the retirement of leading researchers. Over about a 15-year period, Perry led the UW effort to establish and expand campus-wide strength in study of the structure and function of biological molecules, most notably enzymes. With Henry Lardy and Helmut Beinert already housed in the Institute, Perry was able to recruit Mo Cleland from across the street in Biochemistry and George Reed from University of Pennsylvania to join the Institute. This core strength was extended to structural studies when John Markley was recruited to the UW Biochemistry Department from Purdue University, Ivan Rayment was recruited to the Institute from the University of Arizona, Hazel Holden was recruited to the Institute and the UW Chemistry Department, and later transferred to the Biochemistry Department, and Brian Fox was recruited as a new Assistant Professor. Thus assembled, the Institute for Enzyme Research was reinvigorated as a premier site in the world for collaborative studies in enzymology. One defining characteristic of this time in the early and mid-1990s was the sharing, cooperative, environment of the Institute, where students, post-doctorals, academic staff, and faculty members roamed freely, with respectful access to all of the substantial resources assembled to bear on problems of collective interest. There was no corner where a receptive ear to a new idea in research or a helpful comment could not be found.

At UW, Perry and his research group continued the studies of phosphoryl transfer enzymes and exploited the power of chiral phosphothioate analogs to expand the understanding to more enzymes and to chemical systems. In the strong Institute research environment, previous studies of pyruvate dehydrogenase expanded, and studies of another complex thiamine pyrophosphate-dependent enzyme, alpha keto glutarate dehydrogenase were begun. Undecagold clusters were produced and used as biochemical labeling agents, and the participation of strong hydrogen bonds in enzymatic reactions came into vogue.

Likewise, the work on the clostridial enzyme lysine 2,3-aminomutase began. In a prescient 1993 manuscript in FASEB Journal, Perry first queried with the title, “Lysine 2,3-aminomutase:  Is adenosylmethionine a poor man’s adenosylcobalamin?” Now we know the extent of the poor man’s strategy for generation of a reactive radical species in an enzyme active site: a gene family found in all kingdoms of life, with more than 2400 different family members at this writing. 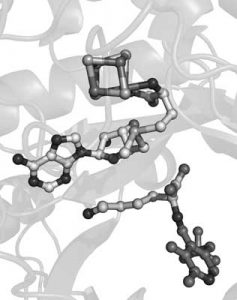 The figure to the left shows the active site of lysine 2,3-aminomutase from the crystal structure solved by Bryan Lepore, Frank Ruzicka, and Perry in Dagmar Ringe’s lab at Brandeis University. The protein has a triose phosphate isomerase fold, and also revealed the locations of a site-differentiated [4Fe-4S], pyridoxal phosphate, S-adenosylmethionine, and bound lysine. S-adenosylmethionine is bound to the unique iron atom in the [4Fe-4S] and has the critical 5’ carbon within – 4 Å of the 2,3-carbons of lysine, which is held into enzyme active site as a Schiff base with pyridoxal phosphate. This beautiful structural study reveals the ternary complex so elegantly documented in the other biochemical work on the enzyme from Perry’s lab.

Alongside the growing appreciation and understanding of radicals in S-adenosylmethionine dependent enzyme reactions, Perry and co-workers performed one of the decisive early experiments on the reaction mechanism of the diiron enzyme methane monooxygenase. Along with the cytochrome P450s, these powerful oxidants were thought to react by hydrogen abstraction, a radical process, but evidence was scant. By using methylcyclopropanes as radical rearrangement probes, they showed that 1e– and 2e– oxidations of unactivated hydrocarbons were both possible from this enzyme reaction. This laid the groundwork for much future experimental and computational analysis of the reactivity of diiron enzymes. This is an enduring characteristic of Perry’s research: early insights supported by crucial experiments and extensive subsequent research undertaken by Perry’s group and many others.

Upon contemplation, Perry has regarded his position as a professor of Chemistry and Biochemistry as the best job in the world for him. From his view, nothing could have been more rewarding than a career working with bright young people, who were in his group by their own choice, and whose aspirations were to improve themselves and have some fun along the way. Research and teaching became an essentially linked continuum, the one always informing, shaping, and improving the other.